History behind Vappu – What is Vappu?

After a long winter, the rays of sunshine start to lure the Finns out of their caves. The winter has been survived! The climax of spring is Vappu, which marks the beginning of summer. It is always celebrated on 1st of May. The Finnish name for May Day, “Vappu”, originates from Catholic St. Walpurgis, who’s commemoration day was celebrated on the 1st of May. The first May Day festivities in Finland started in parsonages and upper-class families in the 1700’s. At that time people celebrated the day by going horse riding enjoying the greenery of spring, and held parties drinking mead in Finnish “sima” at home together with friends and family. Later the sugar coated donuts and “brainbread” have become essential parts of the traditional 1st of May eatings.

Later Vappu became the celebration of the workers – Labour day. In 1970s, when the left wing political parties was very popular in Finland, there were thousands of people attending red flag waving parades organized in major Cities of Finland. Nowadays the political climate is very different and the most visible group of celebrants are the students. Vappu symbols the end of the school year and graduation but most importantly it’s a massive party. When you hit the streets during Vappu, it will be impossible to miss the groups of loud and happy students wearing colorful overalls full of different patches, drink in their hand and a white student cap on their heads. 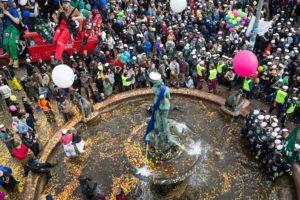 Vappu in Helsinki – What is Vappu?

Celebrations begin on May Day Eve. In Helsinki the statue “Havis Amanda”, which lies near to the Helsinki Market Square, receives her white student’s cap at six o’clock, at the same time as people put their caps on. This has been a tradition since 1932. Similar ceremonies take place in cities all around Finland, with different statues being “capped”.

The inseparable part of the celebration is the Kaivopuisto picnic. For most, the picnic is considered as the hangover or after party picnic. South Helsinki parks will be packed with people desperately hoping for sunny skies. No matter the weather, Vappu will be the time of the year when you will see the most people celebrating outside. Join the carnival!

Check out the official Vappu 2019 Programme in here!